The Underground Map is a project which is creating street histories for the areas of London and surrounding counties lying inside the M25.

Green Street has marked the boundary of the ancient parishes of East Ham and West Ham since the 15th century
Old London postcard
In a series of maps from the 1750s until the 1950s, you can see how London grew from a city which only reached as far as Park Lane into the post war megapolis we know today. There are now over 85 000 articles on all variety of locations including roads, houses, schools, pubs and palaces.

You can begin exploring by choosing a place from the dropdown list at the top left and then clicking Reset Location.

As maps are displayed, click on the markers to view location articles.

You can also view historical maps of London - click on the "pile of paper" control on the top right of a page's map to change to a particular decade.

Latest on The Underground Map... 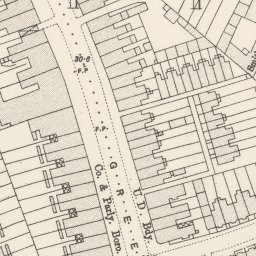 Green Street, E13
Since the 15th century, Green Street has marked the boundary of the ancient parishes of East Ham and West Ham, from the Romford Road to the marshes near the River Thames. The upper portion approaching Forest Gate was at one time called Gypsy Lane as it was once an area frequented by gypsies.

At the nearby junction with Barking Road, there is a Champions statue commemorating West Hamâs players who helped win the 1966 World Cup: Bobby Moore, Geoff Hurst and Martin Peters.

Near Upton Park Underground station, the road becomes a regional centre for retail in food, jewellery and fabrics, and the location of Queens Market. The road has an array of shops specialising in primarily South Asian goods, catering to those with strong cultural and familial ties to Bangladesh, India and Pakistan. The street also has a smaller...

Despite its name, no international services stop at Stratford International - plans for it to be served by Eurostar trains never came to fruition.

On the Docklands Light Railway it is a terminus for local services via Canning Town.
»read full article

On the DLR it is a terminus â one of seven end-of-the-line termini â for local services via Canning Town.

Construction of the National Rail station was completed in 2006, but it only opened in 2009 to serve Southeastern services on HS1.
»read full article

Stratford
Stratford station is a large multilevel railway station in Stratford, east London. The station served as a key arrival point for the London 2012 Summer Olympics and Paralympics. Stratford was historically an agrarian settlement in the ancient parish of West Ham in the county of Essex, which transformed into an industrial suburb following the introduction of the railway in 1839. As part of the growth of London in the late 19th century, Stratford significantly expanded and increased in population, becoming the centre of administration of the Borough of West Ham in 1886 and it has formed part of Greater London since 1965.

The more recent economic history is underpinned by a move away from railway works and heavy industry towards becoming a significant commercial and cultural centre.

Stratford station was opened on 20 June 1839 by the Eastern Counties Railway.

Central Line services started on 4 December 1946, extended from Liverpool Street station in new tunnels after being delayed due to the Second World War. The Docklands Light Railway opened on 31 August 1987 reusing redundant rail routes through the Bow and Popla...
»more

PREVIOUSLY ON THE UNDERGROUND MAP...

The full copyright information for the Underground Map may be found here.