Keeley Street has a dual history

Little Wild street in the Drury Lane rookery (c!902). It was photographed just before its demolition to make way for the Kingsway and Aldwych development.
Credit: User unknown/public domain
Little WildÂ Street came into existence around 1690 - there is a deed dated 1 September 1690 which refers to a "toft, peece or parcell of ground, being parcell of the garden late belonging to Weld House in or near Weld Streete â¦ abutting towards the south to a new streete or passage of thirty foote in breadth there made or intended to be made, to lead out of Weld Streete towards Duke Streete and the arch in Great Lincolneâs Inn Fields." (N.b. Duke Street later became Sardinia Street).

There was a matching Great Wild Street which it lay off of. Towards the end of its history, the Little Wild Street Baptist Church and a school were notable buildings.

As part of the Aldwych scheme, Keeley Street was built over the top of Little Wild Street with its eastern end adjusted to reach Kingsway. All the existing buildings in the original street were demolished, leaving only its route. 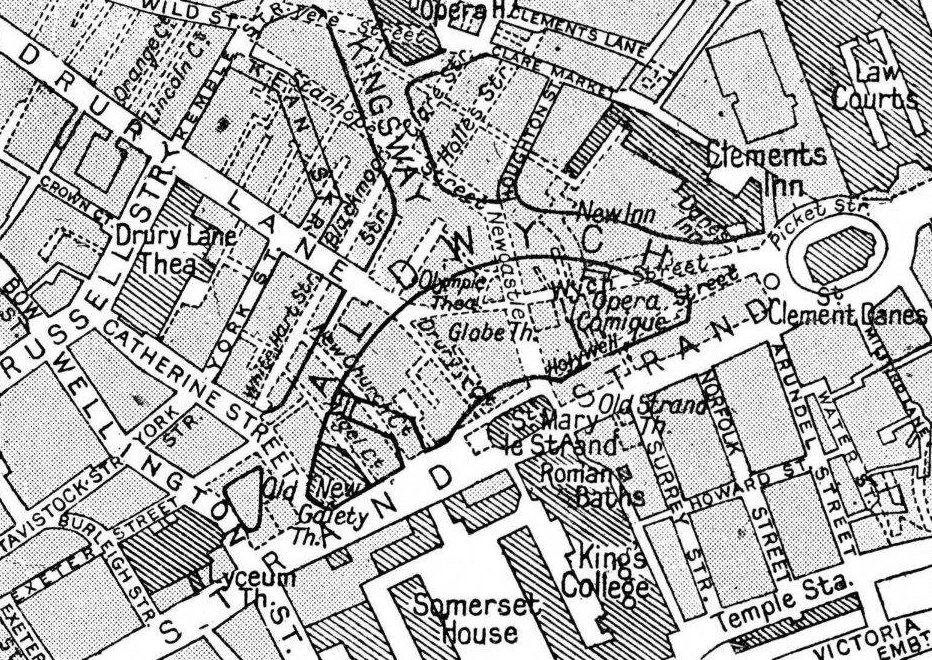 The Aldwych scheme as proposed in 1902 (click to enlarge)

Hol^born is both an area and also the name of the areaâs principal street, known as High Holborn between St. Gilesâs High Street and Grayâs Inn Road and then Hol^born Viaduct between Hol^born Circus and Newgate Street.

The areaâs first mention is in a charter of Westminster Abbey, by King Edgar, dated to 959. This mentions âthe old wooden church of St Andrewâ (St Andrew, Hol^born). The name Holborn may be derived from the Middle English hol for hollow, and bourne, a brook, referring to the River Fleet as it ran through a steep valley to the east.

It was at first outside the Cityâs jurisdiction and a part of Ossulstone Hundred in Middlesex. The original Bars were the boundary of the City of London from 1223, when the Cityâs jurisdiction was extended beyond the Walls, at Newgate, into the suburb here, as far as the point where the Bars where erected, until 1994 when the border moved to the junction of Chancery Lane. In 1394 the Ward of Farringdon Without was created, but only the south side of Holborn was under its jurisdiction with some minor properties, such as parts of Furnivalâs Inn, on the northern side.

In the 18th century, Holborn was the location of the infamous Mother Clapâs molly house but in the modern era High Holborn has become a centre for entertainment venues to suit more general tastes: 22 inns or taverns were recorded in the 1860s and the Holborn Empire, originally Westonâs Music Hall, stood between 1857 and 1960, when it was pulled down after structural damage sustained in the Blitz. The theatre premiÃ¨red the first full-length feature film in 1914, The World, the Flesh and the Devil, a 50-minute melodrama filmed in Kinemacolour.

Charles Dickens took up residence in Furnivalâs Inn, on the site of the former Prudential building designed by Alfred Waterhouse now named Holborn Bars. Dickens put his character Pip, in Great Expectations, in residence at Barnardâs Inn opposite, now occupied by Gresham College. Staple Inn, notable as the promotional image for Old Holborn tobacco, is nearby. The three of these were Inns of Chancery. The most northerly of the Inns of Court, Grayâs Inn, is in Holborn, as is Lincolnâs Inn: the area has been associated with the legal professions since mediaeval times, and the name of the local militia (now Territorial Army unit, the Inns of Court & City Yeomanry) still reflects that. Subsequently the area diversified and become recognisable as the modern street.

A plaque stands at number 120 commemorating Thomas Earnshawâs invention of the Marine chronometer, which facilitated long-distance travel. At the corner of Hatton Garden was the old family department store of Gamages. Until 1992, the London Weather Centre was located in the street. The Prudential insurance company relocated in 2002. The Daily Mirror offices used to be directly opposite it, but the site is now occupied by Sainsburyâs head office.

Hatton Garden, the centre of the diamond trade, was leased to a favourite of Queen Elizabeth I, Sir Christopher Hatton at the insistence of the Queen to provide him with an income. Behind the Prudential Building lies the Anglo-Catholic church of St Alban the Martyr.

In the early 21st century, Holborn has become the site of new offices and hotels: for example, the old neoclassical Pearl Assurance building near the junction with Kingsway was converted into an hotel in 1999.

Holborn station is located at the junction of High Holborn and Kingsway. Situated on the Piccadilly and Central Lines, it is the only station common to the two lines, although the two lines also cross each other three times in West London.

The station was opened by the Great Northern, Piccadilly and Brompton Railway (GNP&BR, now the Piccadilly Line) on 15 December 1906 with the name Holborn (Kingsway). Kingsway was a new road, cutting south from High Holborn through an area of cleared slums to Strand. The suffix was dropped from tube maps in the 1960s.