Broadhurst Gardens in West Hampstead, photographed here in 2009, was home to Decca Studios.

From the late 1870s building had spread on Spencer Maryon Wilson’s lands. Near the Metropolitan railway line was Broadhurst Gardens, where 116 houses were built between 1882 and 1894.
Credit: Geograph/Christine Matthews
Broadhurst Gardens may not be a household name, but back in the day it was the home of Decca Recording Studios which rivalled EMIâs Abbey Road Studios as the countryâs leading recording facility.

Many popular songs and albums were recorded at Decca Studios (for example, John Mayall's 1968 Blues from Laurel Canyon and five albums by the Moody Blues). Britain's leading Big Band, Ted Heath (bandleader) and his Orchestra recorded a succession of outstanding big band jazz records at Broadhurst Gardens for Decca during the band's peak years from 1945 until Heath's death in 1969. David Bowie recorded his first single, Liza Jane, at the studio in 1964. The studios also saw the formation of the original Fleetwood Mac, under the aegis of then-Bluesbreakers guitarist Peter Green, after John Mayall bought him studio time as a birthday present.

Decca was founded on the original site of West Hampstead Town Hall at 165 Broadhurst Gardens, near the junction with West End Lane - built in 1886. 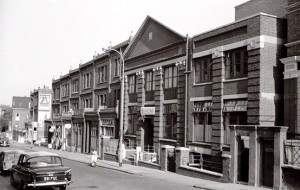 By the early 2000s, the building was home to the English National Opera.

On the corner with West End Lane, the Railway pub was the venue for Jimi Hendrix's first London gig.

From the late 1870s building spread on Spencer Maryon Wilsonâs lands. Several roads, named after Maryon Wilson estates in other counties, ran from Finchley Road to Priory Road. Building began from the east end with 20 houses by Charles Kellond in Goldhurst Terrace, the most southerly of the roads, in 1879. The middle road was Canfield Gardens, where building began in 1881. The northern road, near the Metropolitan railway line, was Broadhurst Gardens, where 116 houses were built between 1882 and 1894. Fairhazel Gardens (originally called North End Road) crossed the three roads to link with Loudoun Road in St. Johnâs Wood.

An early exotic inhabitant was Frederick Rolfe, author and self-styled Baron Corvo, at no. 69 Broadhurst Gardens.

One of the (hidden) features of the road is the Broadhurst Gardens Community Meadow - a private area open only to the residents of the houses which surround it.

Underneath one end of the road, lies the original course of the Kilbourne Stream, a tributary of the River Westbourne.

The name "West Hampstead" was a 19th century invention - the original name was West End.

Lacking its own supply of spring water and situated away from the main roads, medieval West End barely qualified as a hamlet until a few country houses were built here from the 17th century onwards. The tendency for West End Lane to become impassably muddy after heavy rain further enhanced the hamlet's isolation.

By 1815 West End was still excepÂ­tionally quiet â so much so that its inhabÂ­itants claimed to have heard the cannon fire at Waterloo. The construction of the Finchley Road in the 1830s brought few additions to a population that consisted of a handful of squires and some farm labourers, gardeners and craftsmen. By 1851 West End had one inn and two beershops.

Railways were the prime stimulus of growth in many country corners of modern London but few places were transÂ­formed as wholly as West End. With the arrival of the Hampstead Junction Railway in 1857, the Midland Railway in 1868 and the MetroÂ­politan and St Johnâs Wood Railway in 1879, the new suburb of West Hampstead spread in all directions.

Rapid development in the 1880s and 1890s swept away the large houses and the streets were laid out in today's pattern. A local estate agent in Kilburn claimed that he coined the name âWest Hampsteadâ, for one of the local railway stations. Public amenities such as street lighting, gas and electricity were provided and much of the frontage to West End Lane was developed as shops.

Some of the new estates were the work of big developers like the United Land Company, whose inclination was to build fairly densely, and during the latter decades of the 19th century parts of West Hampstead became increasingly working-class in character, with policeman, travelling salesmen and railwaymen mixing with clerks and artisans. EnginÂ­eering workshops operated near the railway lines.

Twentieth-century building was limited mainly to interwar blocks of flats in the north of the district, often in place of Victorian houses that had already become run-down.

The West Hampstead ward now has relatively few families and a great number of young single people. A large proportion of homes are privately rented and fewer than a quarter of adults are married, compared with more than half for the country as a whole. This socio-economic profile is evident in the upmarket cafÃ©s that have lined West End Lane in recent years.

Meadowland with buttercups and daisies
Licence: CC BY 2.0

At Hampstead Heath station, a Stratford bound Overground train emerges from Hampstead Tunnel - the other end of the tunnel can be seen behind the oncoming train.
Credit: nick86235
Licence: