Bayswater Road is the main road running along the northern edge of Hyde Park.

The eastern end of Bayswater Road starts at the Marble Arch junction, and in the west continues into Notting Hill Gate. It is mostly within the City of Westminster but a small portion of the roadâs western end lies in Kensington and Chelsea.

By 1828, the main road (then known as Uxbridge Road) facing Kensington Gardens, had been built up between St Petersburg Place and Porchester Terrace. 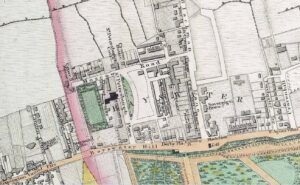 Along the west side of Black Lion Lane (later known as Queensway), there were houses as far as the corner of Moscow Road and more spacious villas, at first called Westbourne Terrace, further north almost reaching Pickering Place at the southern end of Westbourne Green. The east side of Black Lion Lane was still open, apart from a few large houses at the Uxbridge Road end.

A lot of this development was due to the tollbooth at the junction of Black Lion Lane and the Uxbridge/Bayswater Road, attracting the business of horse-drawn traffic waiting to pay the toll and deciding to refresh at the various inns and shops there.

Villas lined Porchester Terrace only as far as the corner of Craven Hill, which itself had cottages only on the north side. Fields survived along the Uxbridge Road from St. Agnes Villas to Bayardâs Watering Place, whence Elm Lane led northward, with some houses between it and the stream, along the line of the later Craven Terrace to the east end of Craven Hill.

By 1830, the area around Black Lion Lane was known as Bayswater.

In 1862 a âgreat and aristocratic townâ had grown up, faster than all other suburbs, during the previous ten years. Houses were said to be better built and sited than before and, being near Kensington Gardens, to have a decided edge over "the solemn and obnubilated grandeur of the ill drained Belgravian flats".

Building covered the whole of Bayswater by 1865, helped by the arrival of the Metropolitan District Railway at Bayswater station (on Queensway) that decade.

Wealthy residents, who were quick to arrive, already in 1862 ranged from East India merchants to people who had moved from formerly more fashionable quarters. In 1885, Bayswater was nicknamed Asia Minor. Indian fruits and vegetables were on sale in local shops for former military and administrative professionals who had lived in the subcontinent. Other people which found themselves here late in the nineteenth century were a Jewish population and Greeks.

Flat began to appear in place of houses during the twentieth century and by the 1960s, hotels were moving in.

Since the 1980s Bayswater has been the focus of a wave of settlement by people from the Middle East spreading from the southern end of the Edgware Road.

On Sunday mornings, over one hundred artists display their original works of art on the edge of Hyde Park close to the Italian Gardens.

Notably, there is a significant Arabic population in Bayswater, a large number of Americans, a substantial Greek community attracted by London’s Greek Orthodox Cathedral and the area is also a centre of London’s Brazilian community.

Architecturally, the biggest part of the area is made up of Victorian mansion blocks, mostly, although not exclusively, divided up into flats. There are also purpose built apartment blocks dating from the inter-war period as well as more recent developments, and a there is large Council Estate, the 800 flat Hallfield Estate, designed by Sir Denys Lasdun and now largely sold off. There are some garden squares in the area.

Queensway and Westbourne Grove are busy High Streets, with a very large number of ethnic restaurants.

The Serpentine Gallery with the 2008 Pavilion. Every year since 2000 the Serpentine Gallery in Kensington Gardens has commissioned a temporary summer pavilion by a leading architect. The series presents the work of an international architect or design team who has not completed a building in England at the time of the Galleryâs invitation. Each Pavilion is completed within six months and is situated on the Galleryâs lawn for three months for the public to explore.
Credit: Wiki Commons
Licence: CC BY 2.0

The Diana, Princess of Wales Memorial Fountain, in Hyde Park, London (2006). Although described as an oval stone fountain, it has the form of a large, oval stream bed of about 50 by 80 metres. The 545 individual pieces of Cornish granite were cut by S. McConnell & Sons, in Kilkeel, Northern Ireland.
Credit: Wiki Commons/CGP Grey
Licence: CC BY 2.0