Hounslow West was once the terminus of the London Underground Hounslow branch.

The original station was opened by the District Railway (now the District line) on 21 July 1884. It was originally named Hounslow Barracks since it was situated close to the Cavalry Barracks in Hounslow which were south of the station on Beavers Lane.

The area around Hounslow Heath had been used for centuries as a garrison because of its proximity to London, Hampton Court and Windsor Castle. Hounslow Barracks was one of 40 new barracks established around the country in the wake of the French Revolution and the barracks later became a depot for the London military district.

At first, the station was the terminus of a single track branch line from the now-closed Hounslow Town station on Hounslow High Street. This branch diverged from the main route about 300 metres east of the present Hounslow East station. When the branch opened there were no intermediate stations between this station and Osterley & Spring Grove (now called Osterley).

New stations were eventually opened and on 1 December 1925 Hounslow West, Hounslow Central and Hounslow East received their current station names. The branch had been electrified in 1905. 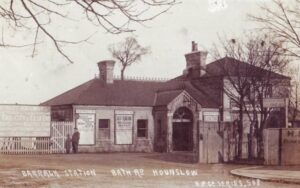 The original building was demolished and a new Stanley Heaps and Charles Holden-designed Hounslow West opened on 5 July 1931 on the Bath Road.

In the 1970s, work began on an extension from Hounslow West to Heathrow Airport. As the Heathrow service required a new alignment, new platforms were brought into use underground in 1975.

Hounslow West is located on Bath Road about 600 metres from its junction with the Great West Road and Great South West Road.