This shows the fields of Rhodes Farm. later to become the site of Euston station.
Credit: Old and New London: Volume 5 (1878)
There was until the reign of William IV, a rustic corner of the outskirts of London between Kingâs Cross and St Johnâs Wood.

The prÃ¦torium of one Roman camp was visible where Barnsbury Terrace is now and the remains of another were situated opposite old St Pancras Church. Herds of cattle grazed at Rhodes Farm near where Euston station is now. In 1707 there were no streets west of Tottenham Court Road and one cluster of houses only, besides the âSpring Water Houseâ nearly half a century later, at which time what is now the Euston Road was still part of an expanse of verdant fields.

In the reign of George IV, as Samuel Palmer writes in his History of St. Pancras: "the rural lanes, hedge side roads, and lovely fields made Camden Town the constant resort of those who, busily engaged during the day in the bustle of . . . London, sought its quietude and fresh air to re-invigorate their spirits. Then the old âMother Red Capâ was the evening resort of worn-out Londoners, and many a happy evening was spent in the green fields round about the old wayside house by the children of the poorer classes. At that time the Dairy, at the junction of the Hampstead Road and Kentish Town Road, was a rural cottage, furnished with forms and benches for the pedestrians to rest upon the road-side, whilst its master and mistress served out milk fresh from the cow to all who came."

The Euston Road (New Road) was at the time of its formation in the eighteenth century, the boundary line for limiting the âruinous rage for buildingâ on the north side of London. It was made by virtue of an Act of Parliament passed in the reign of George II (1756), after the strong objections of the Duke of Bedford, who opposed its construction on the grounds of its approaching too near to Bedford House - the dukeâs town mansion. The Duke of Grafton, on the other hand, strenuously supported it, and after a fierce legal battle it was ultimately decided that the road should be formed.

In the Gentlemanâs Magazine for 1755 there is a ground plan of the New Road, from Islington to Edgware Road, showing the then state of the ground (and the names of the proprietors) between Oxford Street and the New Road. The Act of Parliament for the formation of this great thoroughfare directed that no building should be erected âwithin fifty feet of the New Road.â 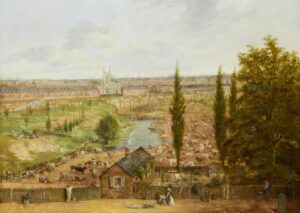 In Gwynnâs London Improved published in the first decade of the 1800s, it is stated that "the present mean appearance of the backs of the houses and hovels have rendered this approach to the capital a scene of confusion and deformity, extremely unbecoming the character of a great and opulent city." Gwynnâs remarks applied aptly to the quarter of a mile of the New Road which lies between Gower Street North, where the old Westgate Turnpike formerly stood, and the eastern entrance to Regentâs Park. Here the road was narrow, and perpetually obstructed by wagons. The New Road between Battle Bridge (Kingâs Cross) to Tottenham Court Road was considered unsafe after dark. Parties would "collect at stated points to take the chance of the escort of the watchman in his half-hourly round."

In course of time, an improvement was made and that part of the road was widened by the removal of some obtruding houses, and the thoroughfare made as nearly as possible of one uniform width all along, with the exception of the hundred yards immediately to the west and east of the Adam and Eve at the junction of the Euston Road, Hampstead Road and Tottenham Court Road.

After constructing the Metropolitan Railway before 1863 using âcut and coverâ, the railway company re-made the roadway.

At the corner of the Euston Road and Hampstead Road was a public house. Nearly on the site of what is now Tolmers Square, was a reservoir of the New River Company, surrounded with a grove of trees - removed around 1860.

The Adam and Eve as late as 1832 was quite a rural inn, only one storey in height, âwith spacious gardens at the side and in the rear, a fore-court with large timber trees, and tables and benches for out-door customers. In the gardens were fruit-trees and bowers and arbours for tea-drinking parties. In the rear there were no houses at all; now there is a town.â

An advertisement in September 1718, tells us how that "there is a strange and wonderful fruit growing at the âAdam and Eve,â at Tottenham Court, called a âCalabathâ, which is five feet and a half round, where any person may see the same gratis."

The rural nature of the neighbourhood of the Adam and Eve can be seen from an advert which appeared in 1708:â"At Tottenham Court, near St. Gilesâs, and within less than a mile of London, a very good Farm House, with outhouses and above seventy acres of extraordinary good pastures and meadows, with all conveniences proper for a cowman, are to be let, together or in parcels, and there is dung ready to lay on. Enquire further at Mr. Boltonâs, at the sign of the âCrown,â in Tottenham Court aforesaid, or at âLandonâs Coffee House,â over against Somerset House, Strand."

The first street to the north of the "Adam and Eve" in the Hampstead Road became called Eden Street - now gone.

The streets on the west side on Hampstead Road are mostly named after the first names of the family of the owner of the land, such as Henry, Charles, Frederick, William, Robert, and Edward Streets.

At the corner of Charles Street (formerly Solâs Row) was the Solâs Arms which is immortalised by Dickens in "Bleak House." It derives its name from the Solâs Society, an institution which was conducted somewhat upon the principles of freemasonry. They used to hold their meetings at the "Queen of Bohemiaâs Head," in Drury Lane; but on the pulling down of that house the society was dissolved. In Solâs Row, David Wilkie, the artist, resided for some time, and there painted his Blind Fiddler.

The remaining streets on the west side of Hampstead Road have other designations: Rutland Street, Granby Street and Mornington Crescent, which connects the road with Camden High Street. Granby Street commemorates the English general, the Marquis of Granby. Mornington Crescent compliments the Earl of Mornington, then Governor General of India and the brother of the Duke of Wellington.

Charles Dickens, when about twelve years old, was sent to a school in Hampstead Road, close to the corner of Mornington Place and Granby Street and called Wellington House Academy. At this time Dickens was living with his parents, in "a small street leading out of Seymour Street, north of Mr. Judkinâs Chapel." Whilst here he would "ramble over the Field of the Forty Footsteps".

On the eastern side of the Hampstead Road, the Old Kingâs Head at the corner opposite to the Adam and Eve presented an "awkward break in the uniform width of the Euston Road", by projecting some feet beyond its neighbours, and so narrowing the thoroughfare. To the north of this tavern much of the land facing Eden Street was not built upon until about 1860. Here were large waterworks and a reservoir.

Drummond Street, the next road to the north, extends along by the front of Euston station. This street crosses George Street, which runs from Gower Street to Hampstead Road. Between George Street and Cardington Street is St Jamesâs Church, formerly a chapel of ease to the mother church of St Jamesâs, Piccadilly.

The Russell family owned the land further to the north - the names of several of the streets and squares commemorate them and a considerable part of the district was originally called Bedford New Town.

Ampthill Square - now disappeared beneath railway tracks - was not a square but a triangle. It was named after Ampthill Park in Bedfordshire, formerly the seat of the Earls of Upper Ossory, but afterwards the property of the ducal house of Bedford, to whom the land about this part belonged.

Harrington Square faces two sides of a triangular plot of ground, facing Mornington Crescent called after the Earl of Harrington, one of whose daughters married the seventh Duke of Bedford.

Euston was the first inter-city railway station in London. It opened on 20 July 1837 as the terminus of the London and Birmingham Railway.

The site was selected in the early 1830s by George and Robert Stephenson, engineers of the London and Birmingham Railway. The area was then mostly farmland at the edge of the expanding city of London. The station was named after Euston Hall in Suffolk, the ancestral home of the Dukes of Grafton, who were the main landowners in the area.

The original station was built by William Cubitt. It was designed by the classically trained architect Philip Hardwick and initially it had only two platforms, one for departures and one for arrivals. Also designed by Hardwick was a 72 foot-high Doric propylaeum, the largest ever built, erected at the entrance as a portico and which became known as the Euston Arch.

The station grew rapidly over the following years as traffic increased. It was greatly expanded in the 1840s, with the opening in 1849 of the spectacular Great Hall, designed by Hardwick's son Philip Charles Hardwick in classical style.

In the early 1960s it was decided that a larger station was required. Because of the restricted layout of track and tunnels at the northern end, enlargement could be accomplished only by expanding southwards over the area occupied by the Great Hall and the Arch. Amid much public outcry, the station building including the Arch was demolished in 1961-2 and replaced by a new building. Its opening in 1968 followed the electrification of the West Coast Main Line.

A few remnants of the older station remain: two Portland stone entrance lodges and a war memorial. A statue of Robert Stephenson by Carlo Marochetti, previously in the old ticket hall, stands in the forecourt.

A 2500 pound German bomb, buried opposite University College Hospital, is about to be removed by Army sappers as people in the area are evacuated to a safe distance (1948) Metropolitan "Câ Division covered the West End. Note the âon dutyâ striped armbands and the black helmet plates (now silver). The bomb fell in 1941 near to the corner of Stanhope Street and Euston Road.
Credit: Creative Commons image from New Times Paris Bureau Collection
Licence:

The March Of The Guards To Finchley - outside the Adam and Eve Tea Rooms.
Credit: William Hogarth
Licence: CC BY 2.0

This painting bears the inscription: All that remained in the year 1844 of the once celebrated Rhobess Farm, Hampstead Road now Ampthill Square
Credit: Wikimedia Commons
Licence: CC BY 2.0