The BT Tower is a communications tower, previously known as the GPO Tower, the Post Office Tower and the Telecom Tower.

The Post Office Tower - now known as the BT Tower - opened in the Fitzrovia area of central London in 1965.

The tower’s main structure was 177 metres high. A further section of aerial rigging brought the total height to 191m.

It was the tallest building in the UK until London’s NatWest Tower opened in 1980.
Credit: Wiki Commons
The main tower structure is 177 metres high, with a further section of aerial rigging bringing the total height to 191 metres. The building was designed by the architects of the Ministry of Public Building and Works: Eric Bedford and G. R. Yeats.

The structure was commissioned by the General Post Office (GPO) and its primary purpose was to support the microwave aerials then used to carry telecommunications traffic from London to the rest of the country. It replaced a much shorter tower which had been built on the roof of the neighbouring Museum telephone exchange to provide a television link between London and Birmingham. The taller structure was required to protect the radio linksâ line of sight against some of the tall buildings in London then in the planning stage. 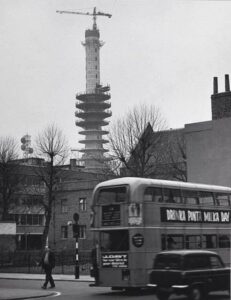 The narrow cylindrical shape was chosen because of the requirements of the communications aerials: the building shifts no more than 25 centimetres in high wind speeds. Initially, the first 16 floors were for technical equipment and power. Above that was a 35-metre section for the microwave aerials, and above that were six floors of suites, kitchens, technical equipment, a revolving restaurant on the 34th floor and finally a cantilevered steel lattice tower. To prevent heat build-up, the glass cladding was of a special tint. The construction cost was Â£2.5 million. As well as the revolving restaurant (The Top of the Tower and operated by Butlins), the tower used to host viewing galleries - almost an essential family day out in the 1960s - and a souvenir shop.

The tower was topped out on 15 July 1964, and officially opened by the then Prime Minister Harold Wilson on 8 October 1965. In its first year the Tower hosted nearly one million visitors and over 100 000 diners ate in the restaurant.

Due to its importance to the national communications network, information about the tower was designated an official secret. In 1978, the journalist Duncan Campbell was tried for collecting information about secret locations, and during the trial the judge ordered that the sites could not be identified by name; the Post Office Tower could only be referred to as âLocation 23â.

A bomb exploded in the roof of the menâs toilets at the Top of the Tower restaurant on 31 October 1971. Responsibility for the bomb was claimed both by the IRA and the Angry Brigade, an anarchist collective. The bomb resulted in the tower being largely closed to the general public and public access to the building ceased completely in 1981. 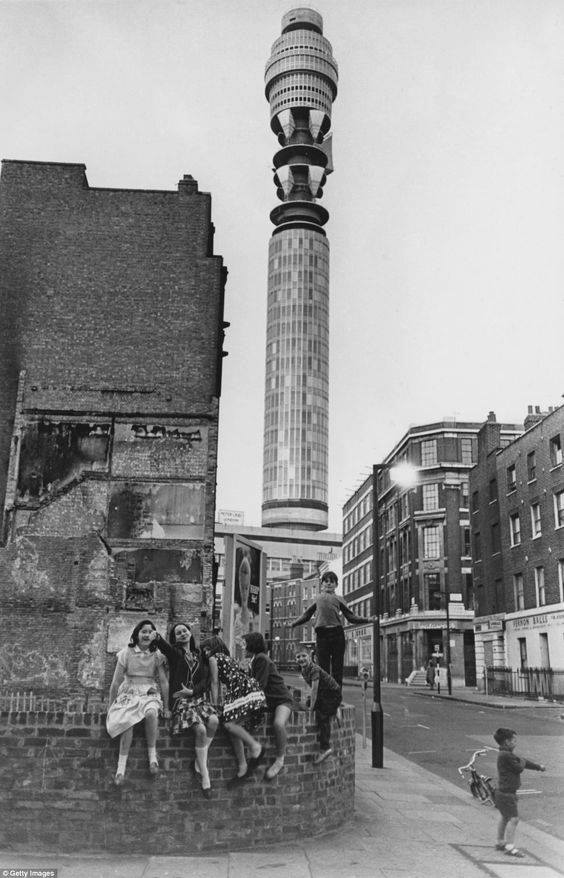 Youngsters play on the corner of Clipstone Street and Great Titchfield Street, in front of the Post Office Tower in 1965. Entry to the viewing gallery cost four shillings and was half price for children (Getty Images) (click image to enlarge)

Upon completion the Post Office Tower overtook the Millbank Tower to become the tallest building in both London and the United Kingdom, titles it held until 1980, when it in turn was overtaken by the NatWest Tower.

The tower is still in use, and is the site of a major UK communications hub. Microwave links have been replaced by subterranean optical fibre links for most mainstream purposes, but the former are still in use at the tower. The second floor of the base of the tower contains the TV Network Switching Centre which carries broadcasting traffic and relays signals between television broadcasters, production companies, advertisers, international satellite services and uplink companies. The outside broadcast control is located above the former revolving restaurant.

A renovation in the early 2000s introduced a 360Â° coloured lighting display at the top of the tower. Seven colours were programmed to vary constantly at night and intended to appear as a rotating globe to reflect BTâs "connected world" corporate styling. The coloured lights give the tower a conspicuous presence on the London skyline at night.

In October 2009, a 360Â° full-colour LED-based display system was installed at the top of the tower, wrapped around the 36th and 37th floors. This comprises 529 750 LEDs arranged in 177 vertical strips, spaced around the tower.

In April 2019, the display spent almost a day displaying a Windows 7 error message.

Fitzrovia is the area lying to the west of Tottenham Court Road.

The Prince of Wales Theatre in 1903 shortly before its demolition for the building of the Scala Theatre in 1904.
Credit: Caroline Blomfield
Licence: CC BY 2.0

A 2500 pound German bomb, buried opposite University College Hospital, is about to be removed by Army sappers as people in the area are evacuated to a safe distance (1948) Metropolitan "Câ Division covered the West End. Note the âon dutyâ striped armbands and the black helmet plates (now silver). The bomb fell in 1941 near to the corner of Stanhope Street and Euston Road.
Credit: Creative Commons image from New Times Paris Bureau Collection
Licence:

The March Of The Guards To Finchley - outside the Adam and Eve Tea Rooms.
Credit: William Hogarth
Licence: CC BY 2.0