St Giles is a district of central London, at the southern tip of the London Borough of Camden.

There has been a church at St Giles since Saxon times, located beside a major highway. The hospital of St Giles, recorded c. 1120 as Hospitali Sancti Egidii extra Londonium was founded, together with a monastery and a chapel, by Queen Matilda, wife of Henry I. St Giles (c. 650 â c. 710) was the patron saint of lepers and the hospital was home to a leper colony, the site chosen for its surrounding fields and marshes separating contagion from nearby London.

A village grew up to cater to the brethren and patients. The crossroads which is now St Giles Circus, where Oxford Street, Charing Cross Road, Tottenham Court Road and New Oxford St meet, was the site of a gallows until the fifteenth century. Grape Street, in the heart of the St Giles district, runs beside the site of the hospitalâs vineyard.

The monastery was dissolved during the Reformation and a parish church created from the chapel. The hospital continued to care for lepers until the mid sixteenth century, when the disease abated and the hospital instead began to care for indigents. The parish was known as St Giles in the Fields and it is recorded in 1563 as Seynt Gyles in the Field.

The first post-Catholic parish church was built in 1631 and from the mid-seventeenth century church wardens note "a great influx of poor people into this parish".

The 1665 Great Plague started in St Giles and the first victims were buried in the St Giles churchyard. By September 1665, 8000 people were dying a week in London. By the end of the plague year there were 3216 listed plague deaths in St Giles parish, which had fewer than 2000 households. After the Restoration, the area was populated by Huguenot refugees who had fled persecution and established themselves as tradesmen and artisans, particularly in weaving and the silk trade.

The southern area of the parish, around present day Shaftesbury Avenue, was a wasteland named Cock and Pye Fields. Houses were not built there until 1666, after the Great Fire, and not fully developed until 1693, becoming known as Seven Dials. Thomas Neale built much of the area, giving his name to Neal Street and Nealâs Yard. St Giles and Seven Dials became known for their astrologers and alchemists, an association which lasts to this day. The village of St Giles stood on the main road from Holborn to Tyburn, a place of local execution. Convicted criminals were often allowed, in tradition, to stop at St Giles en route to Tyburn for a final drink - a St Giles Bowl - before hanging. 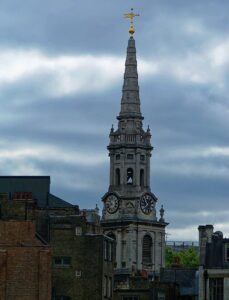 The ancient parish of St Giles in the Fields formed part of the Ossulstone hundred of Middlesex. The parish of St George Bloomsbury was split off in 1731, but the parishes were combined for civil purposes in 1774 and used for the administration of the Poor Law after the Poor Law Amendment Act 1834.

As London grew in the 18th and 19th centuries, so did the parishâs population, rising to 30 000 by 1831. The Rookery stood between the church and Great Russell Street, and Seven Dials near where Centre Point stands today, now home to the Centrepoint homeless charity. It was of one of the worst slums within Britain, a site of overcrowding and squalor, a semi-derelict warren. From Georgian affluence in the 18th century, the area declined rapidly, as houses were divided up, many families sharing a single room. Irish Catholic immigrants seeking to escape desperate poverty took up residence and the slum was nicknamed âLittle Irelandâ or âThe Holy Landâ. The expression "a St Giles cellar" passed into common parlance, describing the worst conditions of poverty. Open sewers often ran through rooms and cesspits were left untended. Residents complained to the Times in 1849 : "We live in muck and filth. We aint got no priviz, no dust bins, no drains, no water-splies, and no drain or suer in the hole place." The rookery was a maze of gin shops, prostitutesâ hovels and secret alleyways that police had little of hope navigating. William Hogarth, Thomas Rowlandson and Gustav Dore, among others, have drawn the area, novelists Henry Fielding and Charles Dickens have written about it extensively. Peter Ackroyd writes "The Rookeries embodied the worst living conditions in all of Londonâs history; this was the lowest point which human beings could reach".

From the 1830s to the 1870s plans were developed to demolish the slum as part of London wide clearances for improved transport routes, sanitation and the expansion of the railways. New Oxford Street was driven through the area to join the areas of Oxford Street and Holborn. The Rookery dwellers were not re-housed by the authorities. 5000 were evicted and many just moved into near by slums, such Devilâs Acre and Church Lane making those more overcrowded still. The unchanging character of the area, failing investment schemes and inability to sell new properties ensured that plans for wholesale clearance were stymied until the end of the century.

The Central London Railway opened Tottenham Court underground station, between the Church of St Giles in the Fields and St Giles Circus on 30 July 1900. Tottenham Court Road underwent improvements in the early 1930s to replace lifts with escalators and more recently was rebuilt to cater for the Elizabeth Line.

Since 1965, St Giles has been part of the London Borough of Camden.

The Queenâs Theatre in the West End (2011), then showing the musical "Les Misérables"
Credit: Andreas Praefcke
Licence: CC BY 2.0