John Strype mentions Whitecross Street in his 1720 âSurvey of the Cities of London and Westminsterâ. He called it "a pretty clean Street, but ordinary Built and Inhabited." It is unknown how long before 1710 that the street was built.

The White Cross Cottages were built in 1890 by social reformer Octavia Hill and designed by Elijah Hoole, as model social housing. They include a hall with interior decoration by Walter Crane.

Octavia Hill - who also founded of the National Trust - campaigned for better living conditions for the poor. She had built thousands of homes by the time of her death. Hill operated on a '5% principle' - investment in such philanthropic ventures should provide a 5% return on capital. Surplus rental income was put into schemes including education and playgrounds and open spaces.

The properties were managed by a network of female volunteers (and later paid workers) who operated a system of weekly visits to collect the rent. Those visits allowed the women to perform a social work role in getting to know the family and help with issues such as finding employment.

The housing scheme grew enormously, and gradually moved from refurbishing existing properties to building new ones as well - including White Cross Cottages and also nearby Red Cross Cottages.

The dense grain of local small buildings was in part eroded after the Second World War. As redevelopment occurred, larger blocks, occupied by single uses, replaced the Georgian and Victorian houses, shops and warehouses. This is particularly evident in the area between Ayres Street and Southwark Bridge Road. 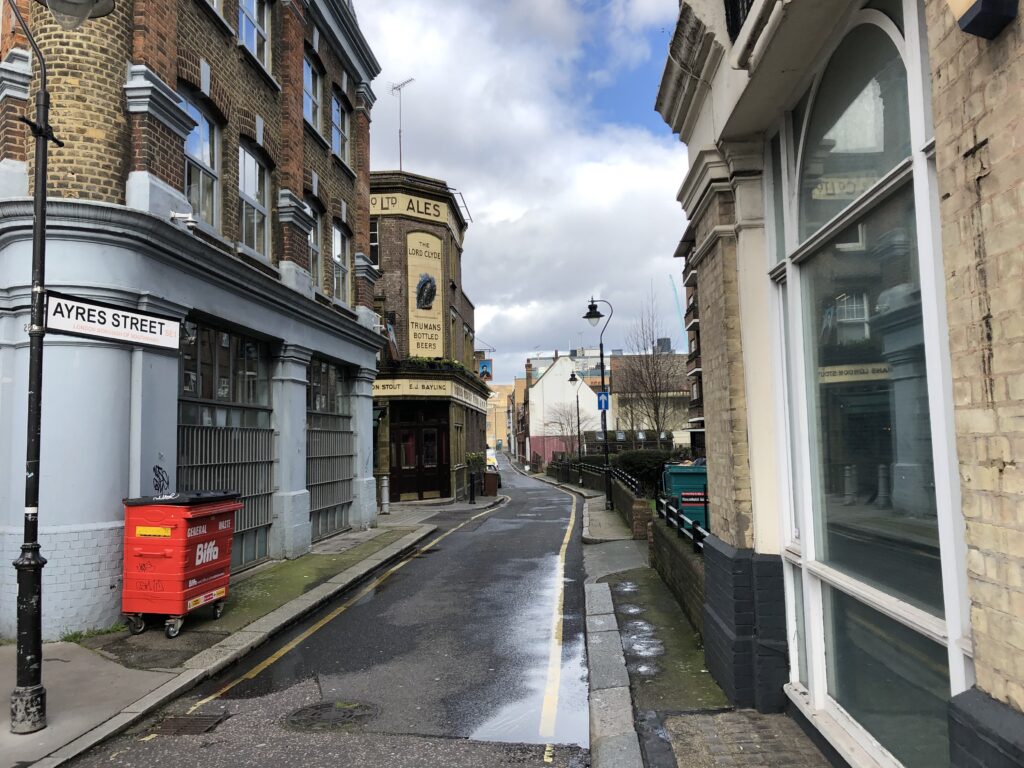 Ayres Street, with its distinctive streetlamps (click image to enlarge)

Borough tube station is a London Underground station in the London Borough of Southwark. It is on the Northern Line, between Elephant and Castle and London Bridge stations.

The Borough (of Southwark) is an area of the London Borough of Southwark situated 1.5 miles east south-east of Charing Cross.

Much of the area around the Tate Modern gallery and the Globe Theatre is now referred to by the historic name of Bankside.

In common with much of the South Bank, The Borough has seen extensive regeneration in the last decade. Declining light industry and factories have given way to residential development, shops, restaurants, galleries and bars. The area is in easy walking distance of the City and the West End.

The Borough is generally an area of mixed development, with council estates, office developments, social housing and gated communities side by side with each other.

Georg Giese from Danzig, 34-year-old German merchant at the Steelyard, painted in London by Hans Holbein in 1532
Credit: Hans Holbein
Licence: CC BY 2.0

Walbrook Wharf is an operating freight wharf located in the City of London adjacent to Cannon Street station.
Licence: CC BY 2.0

"London Bridge from the Old Swan" by the Irish painter Hubert Pugh (1780) Shooting the tidal rapids at old London Bridge was dangerous; many passengers preferred to get off at the Old Swan, and walk. Immediately across the river in the painting is St Saviourâs Church, now Southwark Cathedral.
Credit: Hubert Pugh (Bank of England Museum)
Licence:

Anchor Terrace, SE1 A large symmetrical building on Southwark Bridge Road, Anchor Terrace was built in 1834 for senior employees of the nearby Anchor Brewery. The building was converted into luxury flats in the late 1990s.
Credit: Wiki Commons/Jwslubbock
Licence:

In 1824, when Charles Dickens was 12 years old, his father, John Dickens, was arrested and sent to Marshalsea Prison for failure to pay a debt. During this time, Charles (the only member of the family not imprisoned) took up residence in the back-attic of a house on Lant Street, a short walk away from the prison. Lant Street was in an area known as "The Mint" which was notorious for its overcrowded conditions.
Licence: CC BY 2.0

Park Street, Southwark once ran across the Bishop of Winchesterâs park. It was called Maid Lane from a junction which is now with Sumner Street but which was then with Gravel Lane. It then ran to Bank End, then turned south, as now, to its junction past Redcross Street where the Cure almshouses stood in an enclave. Then it turned north east to a junction with Borough market.
Credit: The Underground Map
Licence: CC BY 2.0